The mesmorizing and tragic true story of the iconic Mary Small, a child prodigy, radio singer and Broadway star whose moxie and resilience made her a defining symbol of the Greatest Generation. Despite her success as one of the most recognizable performers of the Golden Age and a fifty year career in show business, she disappeared into obscurity, died penniless and was buried in an unmarked grave. This revealing biography by her long lost grandson breathes life into the obituary she never received yet so richly deserved. 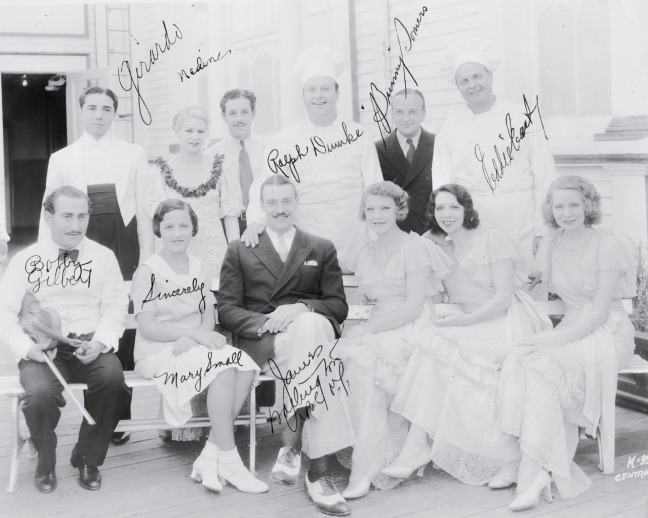 I have had the pleasure of meeting a lot of great people during this journey and one of them is Glenn Santos who provided us with this great picture which I believe is from the New Jersey Steel Pier in the 1930’s. It shows Mary Small with Bobby Gilbert and Ralph Dumpke, but more importantly it shows Mary’s great and close friends, who gave her a huge break after she asked the for an autograph at the Hippodrome in Baltimore. Glenn, thanks for all of your support during this project and your own incredible research product, and hopefully soon we can hear the girls sing together again!

Here’s a great picture of Paramount Pictures’s chief, the one and only Adolph Zukor with the Queen of England in the 1930’s. This kind of gives you an idea of how powerful this great business man was. The story of Adolph Zukor could be the basis for a great movie which I don’t think has ever been tried. I’ve shared this still from The Little Girl with the Big Voice because Adolph Zukor put Mary Small in a Fleischer Brother’s film after seeing her sell out his Paramount Theater in the 1930’s.

In this clip from The Little Girl with the Big Voice, Mary Small describes what it was like growing up as a child star in the 1930′s.  As she says in the film “So you see a child, particularly a girl in those days in the theater, there are two things to look at, you’re suppressed because you cannot play with kids your own age, which is a natural desire, and you are watched over so carefully that you feel like you’re doing something wrong… and you really just want to go rollerskating.”

Very rare footage courtesy of Glenn Santos, showing the Mary Small show on the New Jersey Steel Pier and at the Hippodrome, circa 1936 and seen in the new documentary, “The Little Girl with the Big Voice”

Collectible Matchbooks of Radio Stars from the 1930’s

A surprise find on a random Google images search brings up these promotional matchbooks distributed by NBC in the late 1930’s. This is the second one (from 1938) I’ve found.  A handful of stable stars were selected to appear on these and they probably lit a lot of cigarettes in the day.

Sixteen year old singing star who astounded listeners when she appeared as a guest star with Rudy Vallee five years ago.  Despite her youth, Mary is quite at home in front of a microphone.  Can learn a song in five minutes, and adopts it to her own style.  She was born in Baltimore on May 13* and has been singing since she celebrated her fifth birthday.

*Mary’s birthday is listed as May 10th on IMDB and May 13th in a Press Release on her 13th Birthday.

The matchbooks were made by the Diamond Match Company which you can read more about here.

My Tweets
Follow The Little Girl with the Big Voice on WordPress.com