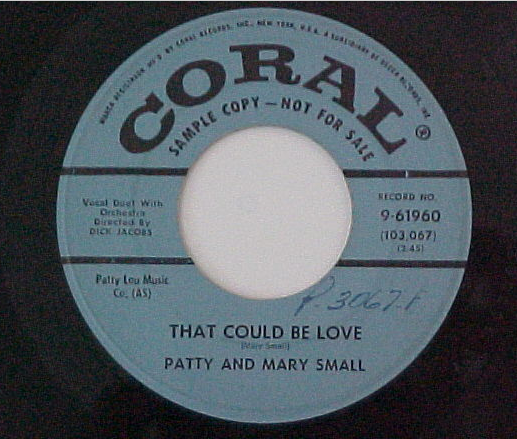 That Could Be Love by Patty and Mary Small

Here’s another gem, a record that Mary cut with my birthmother Patty shown below… The Orchestration was from Dick Jacobs.

Also, a lot of people don’t know it was Patty who sang on this Public Service announcement orchestrated by her father.  The cover below is either They Might Be Giants or possibly Patty Keeler.

And a little more about CORAL RECORDS.

Coral Records was a Decca Records subsidiary formed in 1949. It recorded pop artists McGuire Sisters and Teresa Brewer, as well as rock and roller Buddy Holly.[1]

It was based in the United States. Various jazz and swing band recordings were issued on Coral in the 1940s. Coral’s Artists & Repertoire manager Bob Thiele would marry Coral artist Teresa Brewer. In the late 1950s, Debbie Reynolds briefly recorded for Coral, with such songs as “Tammy”. Coral Records was also the home of Buddy Holly and the Crickets.

Coral was absorbed by MCA Records in the late 1960s. In 1973, MCA amalgamated Decca, Kapp Records, Uni Records, and Vocalion Records under the single MCA Records banner, and the MCA Coral label became the company’s mid-line and budget album reissue label in the U.S. and internationally throughout the 1970s.